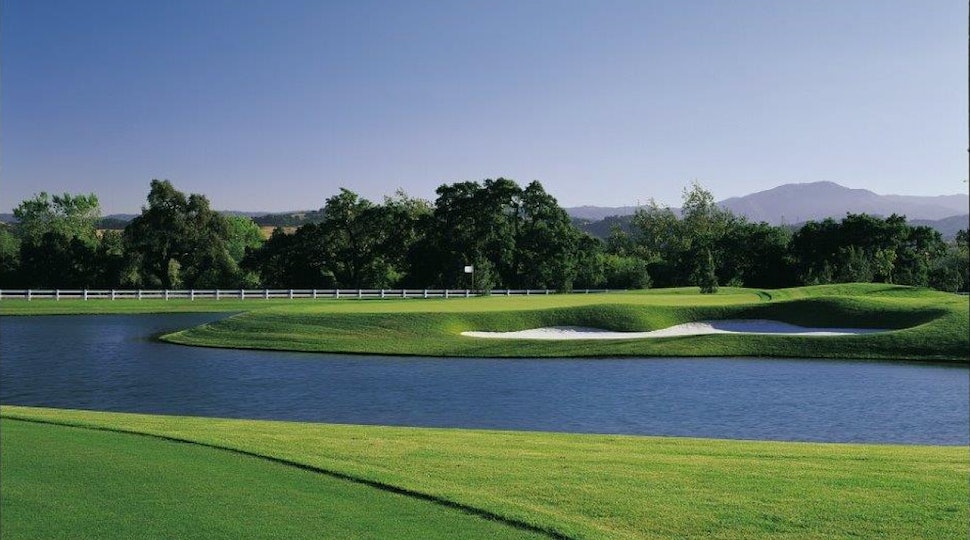 Another beautiful day around the Bay when we traveled thirty-five miles south to Coyote Creek Golf Club. Unfortunately for us the sun was out in full effect which required our players to keep hydrated and maintain focus. A series of four lakes and two waterfalls acts as a grand centerpiece for the final holes of this course. The 18th hole provides a spectacular finish and is widely considered to be the Tournament Course’s Signature hole. At 433 yards, this par 4 is bordered by lakes along the entire right side. An accurate tee shot over the water is rewarded by a short iron approach over the lake fronting the green.

We had an amazing turnout of fifty-two players divided into 4 equal flights. In Flight 1, John Driver was able to hold off the field with a spectacular 71 (-1) on the day and take 1st place. 2nd place and winner of $40 & 45 TOC points goes to Douglas Marinkovich after he posted a round of 73 (+1). 3rd place was tied between Nicholas Kendall and Donald Ragno after they both finished the day with a round of 74 (+2). For 5th place we had another four-way tie between Dave Pasin, Joseph Yagmourian, Brede Kolsrud, and Keith Shiver for their share of 9 TOC each.

Much like Flight 2, 1st place came down to the wire and another tie-breaker decision. Ken Arends edged off Kent Peacock after they both posted a score of 69 (-3). Arends takes 1st place and 55 TOC points while Peacock gets 2nd place and 45 TOC points. 3rd place was a tie between Richard Dauler and Tim Schleiger after they both had a good round of 73 (+1). 5th place and reciving the final 18 TOC points of the Flight goes to Ray Coler for his 74 (+2) effort.

In our final flight of the day, Flight 4, Tom Michalak ran away from the field after he posted a score of 74 (+2) and earning 1st place. 2nd place had a three way tie between Robert Gaffney, Karl Berta, and Creighton Pockalny after they all posted a round of 78 (+6) and earning 35 TOC points each. Trevor Heathorn finished his round with a score of 81 (+9) to take 5th place and 18 TOC points.

As always, we would like to thank all our members who joined us this week and we look forward to seeing you out on the links again soon. Also a big thank you to Tournament Director Trevor Heathorn for his time and effort for another successful PAGC event.
Richard Mundy
Webmaster